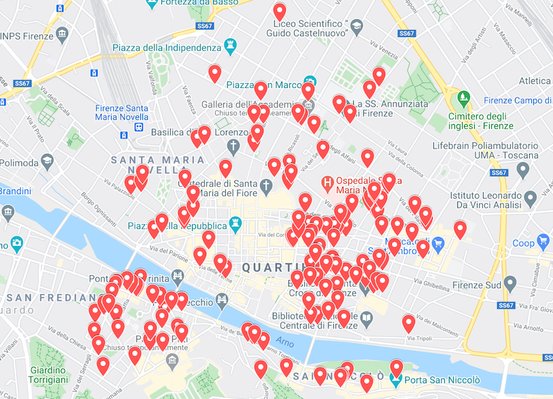 The above map shows the Wine Windows in the Historical Center of Florence.

The map below shows those present in surrounding areas. 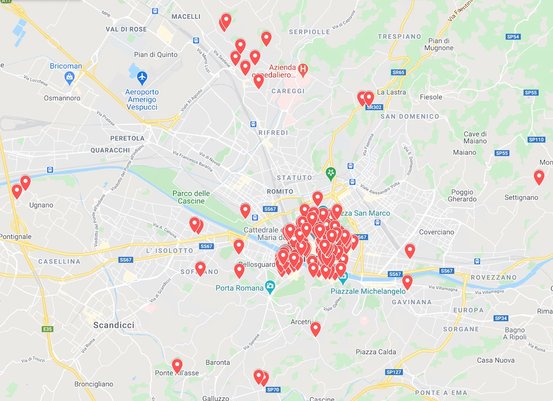 How many are there?

There is no official list of the Florentine Wine Windows, in that they have never been catalogued in any of the public archives of the Italian state, the Region of Tuscany, the City of Florence, or by any of the public institutions which list, survey and protect the historical monuments of the city.

The Wine Windows Association would like to protect and provide testimony regarding the existence and state of preservation of the Florentine Wine Windows. We have been working for months on a census of the Windows which is probably not yet complete—the results can be seen in the boxes below and in the page WHO&WHAT. The numbers will change over time, as new Windows are discovered, and as interested individuals send us new information and documents, photographs and evidence of Windows which are still visible or which have been covered up.

Our public census of the Wine Windows does not pretend to be exhaustive, but as information is accumulated, we will alter the maps and put them in the form of pdf files which can be downloaded and printed.

For now, you can see how many Windows there were and are, from our indications on the maps which have been constructed using Google Maps.  The largest concentration, obviously, is in the Historical Center of Florence, then expanding outwards into the surrounding territory. 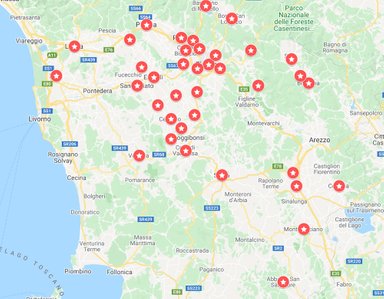 The map above shows 37 localities in Tuscany

where Wine Windows have been identified.

inside the old city walls

outside the old city walls

...and IN TUSCANY (outside Florence)

The pdf to the left contains a complete list of all the Wine Windows which have been identified thus far within the city limits of Florence. You can leaf through the list by clicking on the icon in the upper right corner.

Each Wine Window has been numbered in the list, which will serve as an indicator on the map which we are making which will guide tourists and all of those interested who wish to view the Windows in a walking tour.

Wine Windows are listed in alphabetical order according to the name of the street where they are located, beginning in the Historical Center (inside the city walls) and proceeding to peripheral or suburban areas (outside the city walls). The list will be updated periodically, as new Windows are discovered. We will also remove “false” Windows which sometimes are mistaken for Wine Windows but actually have served other purposes.

The progressive enumeration of the Windows is the same as that used in the Photo Gallery and for the single descriptions found in the News and Highlights section.

The Wine Windows in Florence and some surroundings towns have been used for centuries to purvey millions of glasses and bottles of wine directly to customers. But is it still possible today to drink a glass of wine which has been sold through a Wine Window?

The sale of wine to consumers is conducted in a totally different manner today. However, there are several pubs and restaurants and taverns in the historical center of Florence today which “house” Wine Windows and where you can eat and excellent Tuscan food and drink local wine while observing the Windows from both inside and out.

How many bistros and restaurants have a genuine Wine Window on their premises? We have counted 17 such places which are listed and numbered in our official list, beside, and shown in our Photo Gallery in another section of our website. The addresses you can locate yourselves!

The places indicated in RED are those which have reopened their own Wine Window and serve food, beverages, ice cream, etc. through them, upon request. 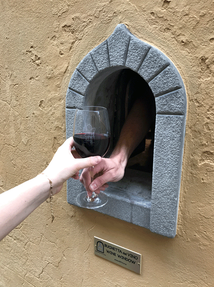 This website is managed by the Wine Windows Association (Associazione Buchette del Vino).

The text has been prepared by Diletta, Corsini, Matteo Faglia and Mary Forrest, except when otherwise indicated.